These are deemed treasures in the world of high-class Chinese cuisine. We take painstaking care over the origin and processing techniques used on our abalones and sea cucumbers to ensure premium quality for safety and peace of mind.

From the Edo period (1603-1867), along with shark fins and dried sea cucumbers, abalones were exported to China under the name “tawaramono sanhin” (three luxury marine products) and, to this very day, abalones are treated as treasure in high-class Chinese cuisine. Gyoren Hokko’s dried abalones under the Emperor (皇冠牌) brand are highly respected, being, notably, given top-brand status in Hong Kong, a magnet for the world’s best dried abalones.And that esteem from consumers is underpinned by the stringent selection of production locations (origins), the ever-vigilant quality control, the mechanisms to guarantee safety that prevent the use of poached and/or contaminated abalones, and the use of processing techniques honed over many, many years. 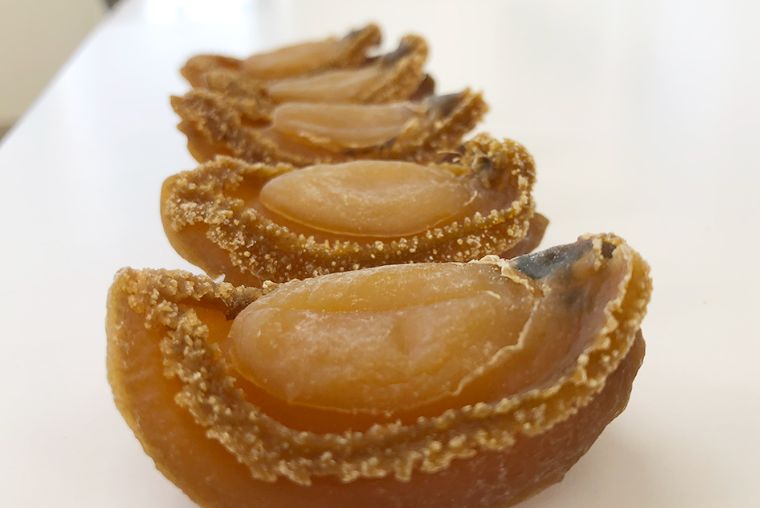 Gyoren Hokko’s Emperor (皇冠牌) brand delivers abalones to the world. In particular, our abalones are worshipped as a premium product in Hong Kong.

The quality of our dried abalones is so high that they are distributed under the Emperor brand, which wins plaudits at home and abroad. And, notably, in Hong Kong, where – more than anywhere else in the world - dried abalones are the most popular, our Emperor brand abalones are considered the best of the best. Indeed, as many fake abalone products circulate Hong Kong, the Emperor (皇冠牌) brand has been registered as a trademark, and we only sell to one specific importer. 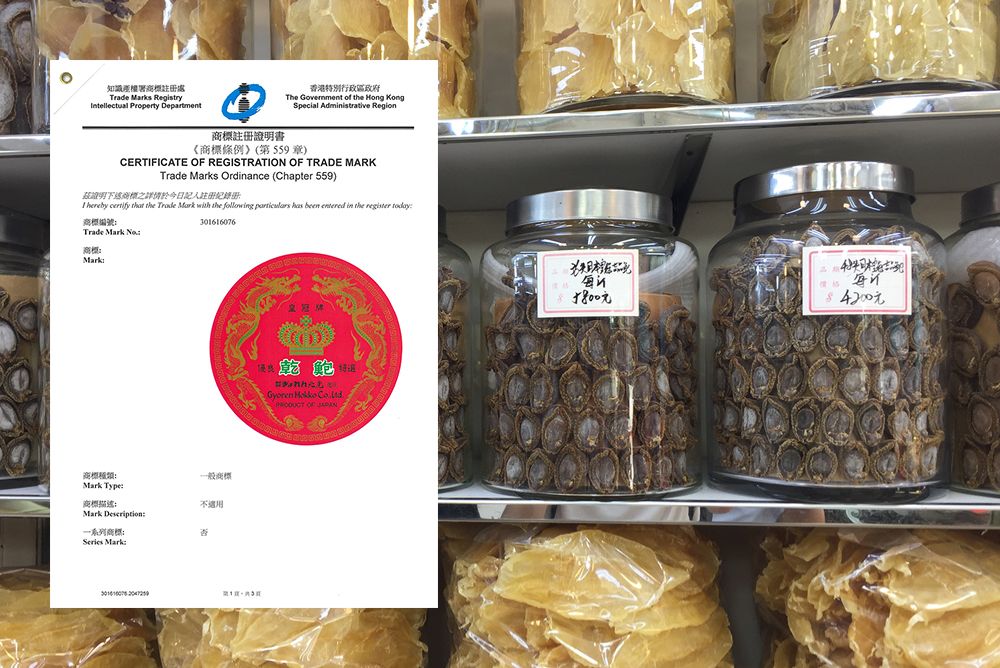 Iwate abalones are known for their excellent quality. We use risk-free abalones that consumers can trust.Z

The coastal region of Sanriku in Iwate prefecture is well known for its good quality abalones. And, we too use Sanriku abalones in Emperor (皇冠牌) brand products. As such, we take the utmost care to ensure peace of mind and safety, including assurances about good quality and proof of authenticity (not poached) in the form of purchase certificates, approval seals and radioactivity test certificates issued by the Iwate Prefecture Federation of Fisheries Cooperatives.

A trusted partner processes our abalones. The expert skills used have been handed down from some 100 years ago in the Taisho period (1912-1926).

Expert skills are needed to process good quality abalones without damaging them. And our partner company that undertakes that delicate work has been doing so with processing techniques unchanged for nigh on a century to continually ensure the quality a top brand requires. 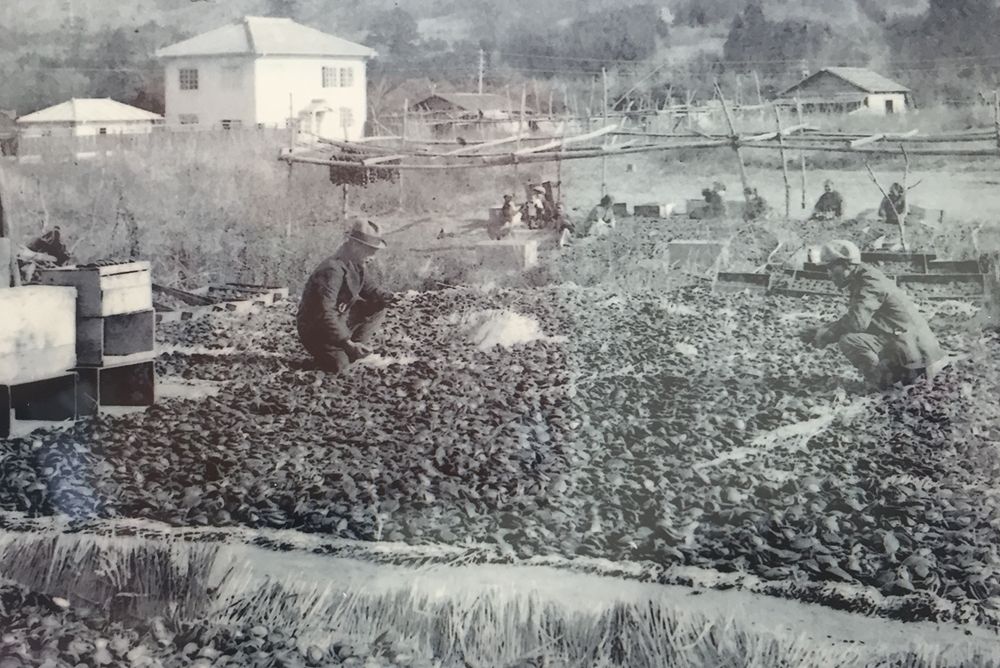 Just like dried abalones, our dried sea cucumbers have a history of being exported to China under the name “tawaramono sanhin” (three luxury marine products) that dates back to the Edo period (1603-1867). And, to this very day, they are prized as a premium ingredient in Chinese cooking. The dried sea cucumbers offered by us at Gyoren Hokko are Hokkaido ones known for their exceptional quality. Sea cucumbers are very expensive, so there are many poached products on the market, but we get the fishery cooperatives we work with to issue landing (harvesting) and processing certificates to prove authenticity, so that we can sell to the world genuine products that are safe and inspire confidence. 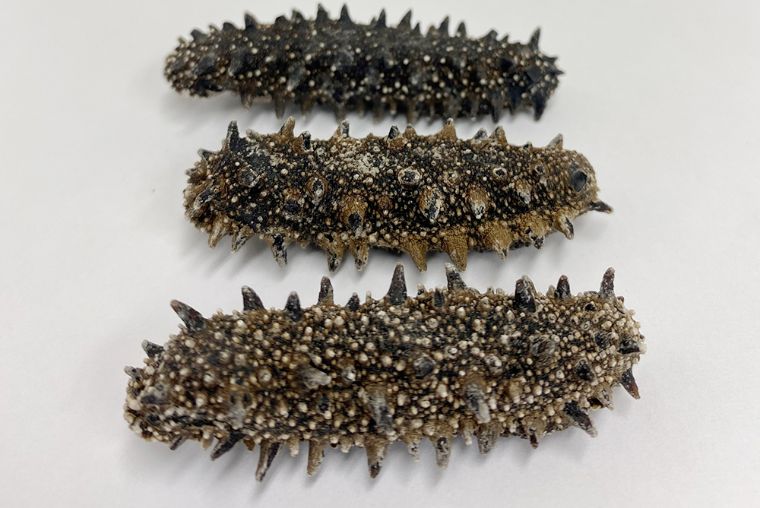 Hokkaido sea cucumbers are much talked about as premium quality products. The reputation of the genuine article is acknowledged at home and abroad.

Gyoren Hokko’s dried sea cucumber products are gems made from fine quality sea cucumbers harvested in Hokkaido. That reputation is not only acknowledged in Japan but also overseas. Such is the value placed on sea cucumbers that they are called “the ocean’s diamond”, leading to many bogus products circulating on the market. Therefore, we make sure that the fishery cooperatives concerned issue purchase certificates to show proof of landing and manufacturing in order to let consumers know that our products are safe and can be trusted.

Hokkaido’s sea cucumbers differ the most from those of other regions in the shape of their “warts”. It is not smooth body surfaces that count but those that are warty, and the larger the warts the greater the value, which is why they are so prized. Sea cucumbers with well-formed warts are regarded as being a lucky charm in China and are sought after for use as an ingredient in high-class cuisine.