Konbu stock (dashi) is an essential ingredient in traditional Japanese cuisine (washoku), which is on the UNESCO Intangible Cultural Heritage List.
Konbu itself can become a cooked food, such as nimono (simmered dishes), kobu-jime (sandwiching layers for sashimi), konbu-maki (konbu rolls), tsukudani (savory preserve) and many other such dishes.

Some 90% of the konbu harvested in Japan is, in actual fact, top-quality konbu from Hokkaido. As a company in the Hokkaido Gyoren Group, we make the most of our strong local connection to handle konbu from all parts of Hokkaido, staying well stocked to fill the requests of our clients and consumers.

OriginHokkaido is the home of good quality konbu.

Nearly all of the konbu eaten in Japan comes from Hokkaido.
Varieties vary depending on harvesting location, as does flavor and cuisine application. 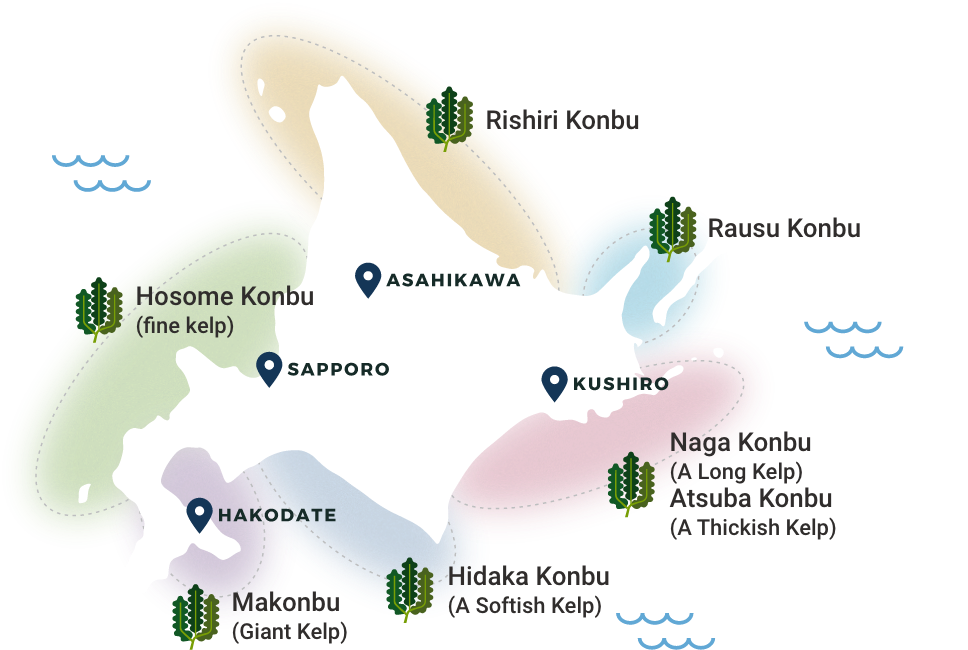 Just on the island of Hokkaido, there are various types of konbu, each used in different ways.

Do you know the differences between konbu types?

Natural Konbu and Farmed KonbuNatural konbu is kelp that has been growing naturally for two years on rock reefs. Whereas, farmed konbu involves artificial cultivation of natural kelp spores, which, when big enough, are then attached to ropes (kelp lines) and cared for as they grow. Of these, the kelp harvested after one year is called “sokusei”, or “forced cultivation” and that harvested after two years is called “yoshoku”, or “farmed”.
Natural konbu attaches to rock reefs to grow there on the seabed, so it is vulnerable to damage from sea urchins that dine on it as a food source. Whereas, farmed konbu grows on horizontal ropes close to the sea surface, where sea urchins cannot reach and cause damage. Yet, plenty of sunlight reaches farmed konbu just under the waves, stimulating greater photosynthesis activity, which often makes farmed konbu look more attractive than natural konbu.
A price comparison between natural and farmed konbu shows that natural konbu is more expensive, yet, there is hardly any difference in quality, which means that farmed konbu sometimes sells for more at bidding auctions. Furthermore, compared to natural konbu, farmed konbu provides a stable annual crop, which makes it a favorite among buyers.

About GradesThe number of grades and naming formats vary depending on the type and quality of the konbu concerned, but, in general, the grades are divided into four (1st to 4th). The grade is determined by the length of a single leaf of kelp, its thickness, weight, hue and other various deciding factors. 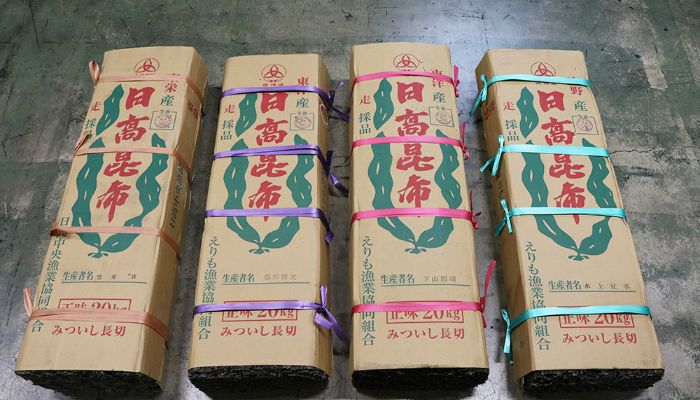 ProcessKonbu Processing up to Shipping

How did the “Konbu Road” popularize Japanese food culture?

Konbu comes from a very cold place, and yet it is used extensively in warm places like Kansai and Okinawa – why is that?
The answer to that mystery can be found in the “Konbu Road”.
In the middle of the Kamakura period (1185-1333), konbu trading ships sailed from Matsumae in Hokkaido to all parts of Honshu (the main island in Japan). Once in the Muromachi period (1336-1573), konbu was taken from Ezochi (Hokkaido) to Tsuruga in Echizen-no-kuni (Fukui prefecture), from where it was forwarded on to Kyoto and Osaka.

Moving onto the Edo period (1603-1867), Kitamae-bune (cargo ships) started sailing directly to the “kitchen of the nation”, Osaka, without going via Tsuruga or Obama, and later going to Edo (Tokyo), Kyushu, Ryukyu Kingdom (Okinawa prefecture) and onto to Qing (China).
And that expanding route from Hokkaido to various places across Japan (and then onto China) is the “Konbu Road”. And, wherever konbu was delivered, it was given innovative uses in cuisine. Hence, the Konbu Road played a role in spreading Japanese food culture. 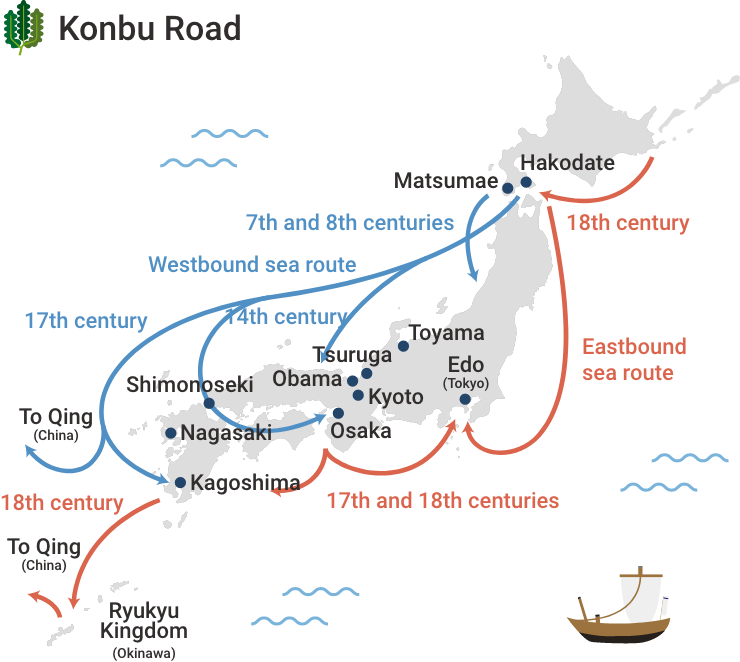